How serious is marine plastic pollution

The infiltration of plastic pollution into aquatic ecosystems has increased dramatically in recent years and is expected to more than double by 2030, with undoubtedly dire consequences for human health, the global economy, biodiversity and the climate.

The assessment, released 10 days before the 26th United Nations Climate Change Conference (COP26), highlights that plastics are also a climate issue: when plastics are analyzed over their life cycle, they released 1.7 billion tons of carbon dioxide equivalent of greenhouse gases in 2015, a figure that is expected to increase to about 6.5 billion tons of carbon dioxide equivalent by 2050, representing 15 percent of the global carbon budget.

The report's authors throw cold water on our desperate attempts to rid ourselves of the plastic pollution crisis. They warn against attempts to replace single-use plastics and other plastic products with destructive alternatives, such as bio-based or biodegradable plastics, which currently pose as much of a chemical threat to the environment as conventional plastics.

The report focuses on key "market failures" such as the lower price of virgin fossil fuel feedstocks compared to recycled materials; the disconnect between informal and formal management efforts related to plastic waste; and the lack of consensus on global solutions.

This assessment provides the strongest scientific argument to date and underscores the severity of the situation and the urgency of collective action to protect and restore the oceans using a 'source-to-ocean' approach," said Inger Andersen, executive director of the United Nations Environment Programme. The urgency of applying a 'source-to-ocean' approach to protect and restore the oceans. A major issue facing us today is the fate of decomposed products, such as microplastics and chemical additives, most of which have proven to be toxic, endangering human and wildlife health and damaging ecosystems. It is encouraging to see how quickly the issue of marine plastic pollution is gaining massive public attention today. We must take advantage of this momentum and seize the opportunity to promote clean, healthy and resilient oceans."

The report highlights that 85 percent of marine litter is plastic. The report warns that the amount of plastic litter flowing into ocean areas will nearly triple by 2040, and that 23-37 million tons of new plastic litter will be added to the oceans each year, equating to 50 kilograms of plastic litter for every meter of coastline worldwide.

As a result, all marine life - from plankton and shellfish to birds, turtles and mammals - is at serious risk of poisoning, behavioral disorders, starvation and suffocation. Corals, mangroves and seagrass beds are also inundated with plastic waste, leaving them without access to oxygen and light.

The human body is equally susceptible to plastic pollution in the water in several ways, which can lead to hormonal changes, developmental disorders, reproductive abnormalities and cancer. Plastics are ingested into the human body through seafood, beverages and even salt; they penetrate the body's skin and can be inhaled when they are suspended in the air.

Marine litter and plastic pollution also have a significant impact on the global economy. in 2018, the overall economic cost of global marine plastic pollution on tourism, fisheries and aquaculture, plus other costs (such as cleanup), was estimated to be at least $6-19 billion. It is projected that by 2040, businesses could be at financial risk of $100 billion per year if governments require them to pay for waste management costs based on expected volumes and recyclability. The large amount of plastic waste will also lead to an increase in illegal disposal of domestic and international waste.

The assessment calls for an immediate global reduction in plastic use and encourages a shift in the entire plastics value chain. The report notes that further global investment is needed to build stronger and more effective monitoring systems to determine the source, scale and fate of plastics, and to develop a risk framework that is missing globally. Ultimately, the world must transition to a circular model that includes sustainable consumption and production practices, accelerated development and adoption of alternatives by businesses, and increased consumer awareness to drive more responsible choices. 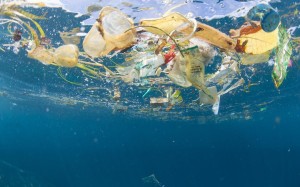